My Breakdown and Breakthrough with Stress Eating 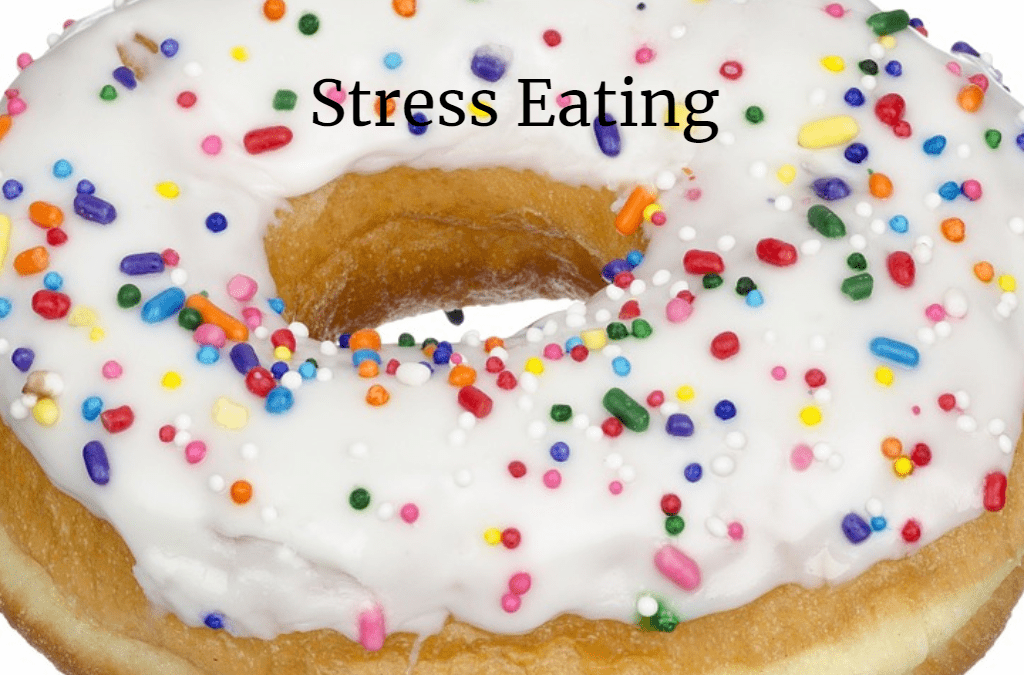 You probably have a good idea what stress eating is. Also called “emotional eating”, it’s using food to make yourself feel better. The reason it works (some of the time) is it can raise serotonin in your brain.

Serotonin, that happy chemical. Studies have shown that sugary carbs can actually give you a little mood boost. Unfortunately, that boost quickly fades which can make you crave another “hit” as soon as it does.

“Many patients learn to overeat carbohydrates (particularly snack foods, like potato chips or pastries, which are rich in carbohydrates and fats) to make themselves feel better. This tendency to use certain foods as though they were drugs is a frequent cause of weight gain, and can also be seen in patients who become fat when exposed to stress, or in women with premenstrual syndrome, or in patients with “winter depression,” or in people who are attempting to give up smoking.”

I experienced a little bout of stress eating last week. I am currently prepping for a bodybuilding photoshoot which has me undereating for my daily energy needs while exercising in the gym six days a week. It’s given me a whole new level of respect for bodybuilders. It’s one thing to imagine how physically and mentally draining a prep is and a whole other thing to actually experience it yourself.

Well, guess what? Last Thursday I crashed. I found myself driving to Shipley’s Donuts. I ordered an apple fritter and glazed chocolate and then I ate them in my car, one after the other.

Can you picture that?

I knew what I was doing. I had even negotiated with myself that I would swap my high-carb refeed day which was Friday, because I didn’t want to wait another day to eat more carbs. I wanted those donuts now!

And guess what? I thoroughly enjoyed them. Did I have a little guilt, a little apprehension about going off my nutrition plan?

But at the time, I was more interested in doing a deep dive into those donuts than my own psychological state.

Not even health coaches are immune to stress eating. In fact, I would hazard to say that most of us are very familiar with these demons, which is why we went into this business. We want to understand ourselves better and help people slay those same monsters.

After I ate those donuts, which I THOROUGHLY enjoyed, I went home. The drive home went like this::

“That was delicious”, I told myself.

“Hit the spot.” said my stomach.

A minute later my brain spoke up, “Sooooooo, what did we learn from that experience?”

You see, at my core, I am an analytical person, and I think it’s one of the things that makes me a good coach: I like to dig into a problem in order to prevent it from happening again.

I didn’t beat myself up. What was done, was done. Now I wanted to figure out what I could learn from what just happened.

And that’s when I realized I was overtraining and not recovering enough. The lack of food was exacerbating the problem. My hunger hormones, leptin and ghrelin, and other happy hormones like testosterone and serotonin were tanking. The food was my body’s attempt to restore things.

The signs had been there for a week or two, but I had been accepting them and living with them and just trying to suck it up. After all, bodybuilding is supposed to be hard.

You can’t fool yourself for very long. The body is smart that way. It nudges and nudges, and if you continue to ignore the signs, something happens. Keep ignoring, and something terrible happens. Fortunately, it only had to get to stuffing my face with donuts in a lonely parking lot to have my moment of truth.

What I needed, more than donuts, was to get rid of the stress that triggered the donut eating in the first place.

I thought about it over the next few days and then made some decisions.

1. My training was exhausting. I needed to ease off a little. Either the intensity or the frequency. Maybe six days a week was too much.

3. My sex drive was dropping.

4. I was developing a short fuse.

5. I was losing my motivation to work out in the gym. And I LOVE to lift weights. The gym and nature are my two happy places.

The body can’t talk but it communicates in its own way. We just have to listen.

Addressing the Root Cause

I emailed my bodybuilding coach about changing my program. It was hard to do. I wanted him to respect me and I was a little concerned he might think less of me, like I was weak or not willing to work hard. He didn’t really know me and we had just started working together.

But it was clear to me that what I was doing wasn’t sustainable, or healthy for me. Someone else might be able to do more, but they weren’t me.

I am not a twenty-something. I am in my forties and I have Hashimotos, an autoimmune disease. I have limitations that other people may not experience, and I have to work within those limitations. It sucks, but it is what it is and trying to be and do things that are impossible for me is stupid.

So I emailed him.

And I waited anxiously for his reply. This was kind of a test. If he told me to suck it up, that it was supposed to be hard, then he wasn’t the right coach for me. A good coach is willing to pivot when needed.

And you know what? He wrote back, “Thanks for letting me know how hard it’s hitting you, that’s why this is teamwork.”

We changed my training program.

It was so easy!

And I was really proud of myself for letting go and surrendering to the situation. 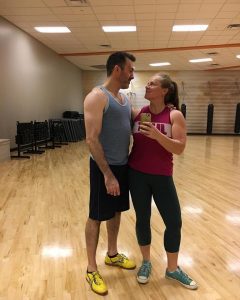 I feel so much better now.
(Me and my husband.)

I am still training 6 days a week but I’m not doing any super heavy lifting at the moment. That’s tough because I love lifting heavy more than anything, but my main focus right now is losing fat and gaining more muscle, not increasing my bench press for competition. That will come next year. I simply can’t serve two masters at once.

So now I’m doing more reps, at a lighter weight, to prevent my Central Nervous System from becoming overly fatigued. When that happens, my mood sinks, my joints ache, and I crave all the carbs.

Eating the donuts wasn’t a character flaw. It was just another sign that I was grinding myself down.

It was a coping mechanism to relieve excessive stress and fatigue.

Stress eating provides a high, or even a temporary numbing from stress, but doesn’t address the root problem.

In fact, it can make it worse because it moves us further away from our health goals and into feelings of helplessness.

Figuring out the WHY, and addressing the root cause of stress eating is the only thing that will make it go away.

In my case, I swapped my high-carb day and reigned things in right away to get back on track. But too many donut days, and I’d be miserable and MORE stressed.

By dealing with the problem of overtraining, my breakdown became my breakthrough.

Would you like to learn how to use macros and flexible dieting to lose fat, maintain your weight, or build muscle? Check out our Eat For Your Goals Course.

So what do you think? Do you have any tips you would be willing to share that help you avoid stress eating? Comment below, because I’d love to hear from you!